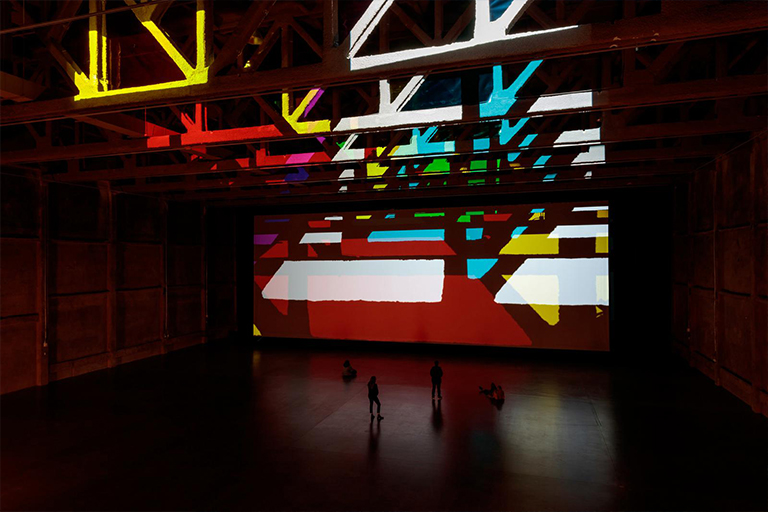 The space is cavernous. The machinations at work creating the abstract play of light, shadow, and geometric shapes on the enormous floor-to-ceiling screen on the opposite end of the room are not readily apparent. The sound betrays only the occasional hint of having been designed – a chorus of construction sounds, piano strings, ratchets, and ambient noise that feels natural to the space. The initial experience of the room is overwhelming, the body dwarfed by this gigantic presentation of light and sound.

This is Olafur Eliasson’s Reality projector.

There are a few benches at the back of the room, I sit for a moment. The view from here is cinematic – a screen in front, a darkened room, an overwhelming audio/visual presentation. The “subject matter” is reminiscent of the avant-garde, I’m reminded of the architecture of Shirley Clarke’s “Bridges Go Round” (1958), and the non-representational cinema of Stan Brakhage, Pat O’Neill, or Harry Smith. The shapes onscreen are triangular, sliding and shifting across the screen, separated by thick black lines at right angles and 45° angles. Primary reds, greens, and blues lay across yellow, cyan, and magenta shapes on screen. It is primary in its entirety – the primary colors of cinema, and the primary elements of light, shadow, space, and movement. The piece relies on a Modernist sense or reduction – only the most essential elements are used. And the piece is compelling, and as a work of cinema it is interesting and beautiful.

But this is not a work of cinema.

It is an installation, it is sculpture. As one’s eyes adjust to the dark, and wander as they do, I see other people in the space. In fact, the silhouettes of other audience members walking across the floor seem an integral part of the piece. The piece does not, as cinema does, create a diagetic world just on the other side of the of the flashing images, forever out of reach. Reality projectorcreates a world within the space. Where cinema promotes seated disembodiment, this installation invites the body to be active within its bounds. Some people sit, some move continuously. A boy with blinking lights on his sneakers seems an apt visitor, adding an element of chance to the experience. People enter and exit without interrupting any kind of narrative flow. I spend a good half an hour in there, and have no sense of any kind of looping or pattern repeating itself.

Where cinema hides its artifice, Reality projector exposes its machinations freely. Looking up, one can see the trusses lit in the same colors as the screen, and looking toward the back of the room two bright stage lights moving laterally on a track. These lights project white light through colored filters (as would be used in theater lighting) to create the effects onscreen. It is deceptively simple – these shapes on screen are simply projections of the already existing architecture. We are treated to an up-close view of the irregularly textured surfaces of the beams’ insulation vis-a-vis the two projecting lights. The idea of the ancient Greeks’, that visions occurs via light projected from the eye, rather than light receiving reflected light, crosses my mind. Plato’s Cave does as well, and like any good metaphor Reality projector trades being accurate for being instructive. The most salient aspect of the metaphor is that the viewer is able to negotiate her own experience, her own relationship, to the piece, much like we do with reality. What is important here is not the physical circumstances that make it up, but our relationship to that set of circumstances.

Reality projector is on view at the Marciano Art Foundation now until August 26, 2018.
marcianoartfoundation.org for tickets and more info.