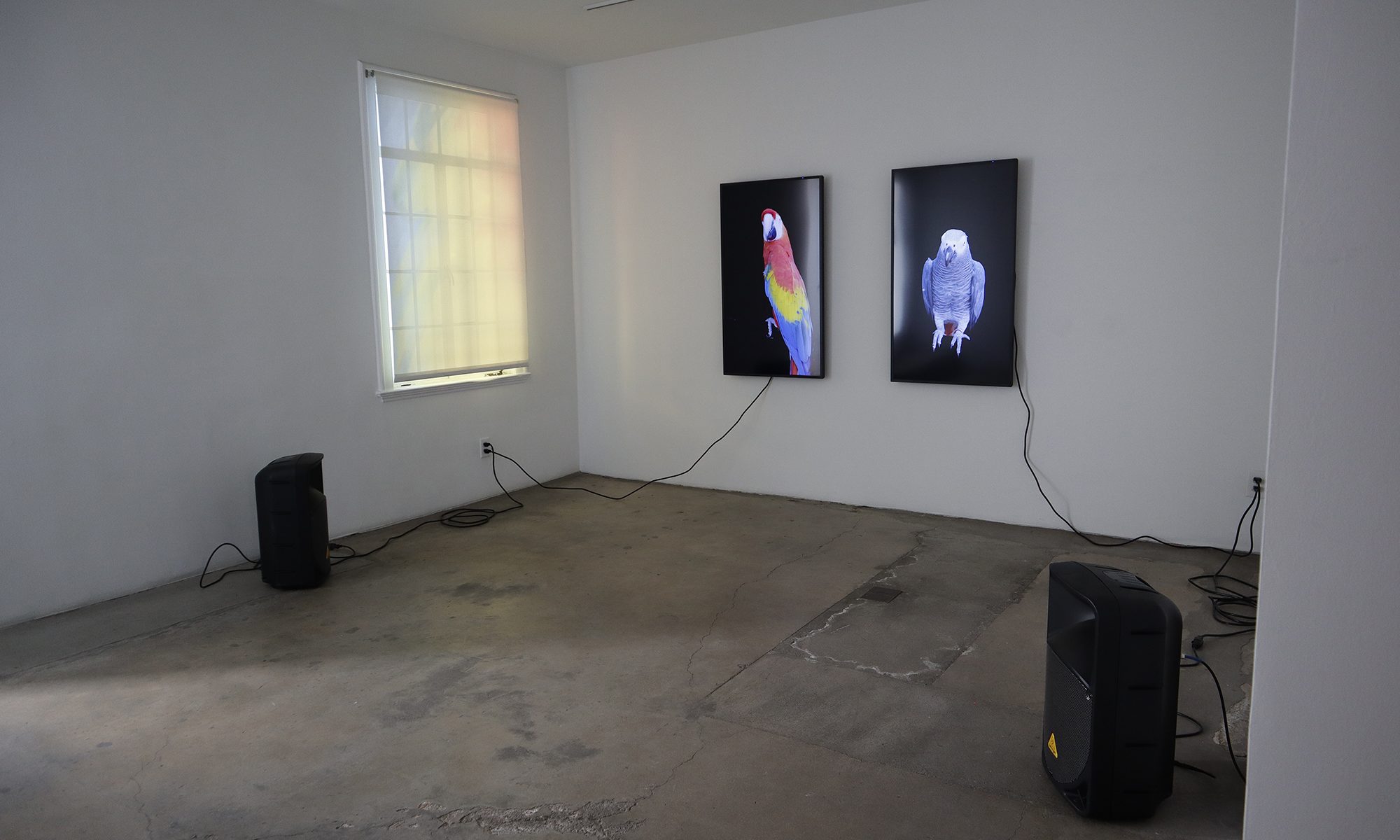 “Listen up, motherf*ckers! Now we’re having fun.” The lines come squawking through a speaker (as in, an object producing sound) on the floor, but who is the speaker (as in, the subject producing the thought)? Is it the African grey parrot, or the scarlet macaw represented in high definition on two vertically-oriented wall monitors? Do we take it to be the human who has voiced it in the style of a parrot? Or is it rather the medium itself that speaks; the speaker on the floor? In any case, these elements comprise Talk to Us (2021, dual channel video/audio) one of two video installations from Diana Thater included in “The Conversation” at 1301PE. 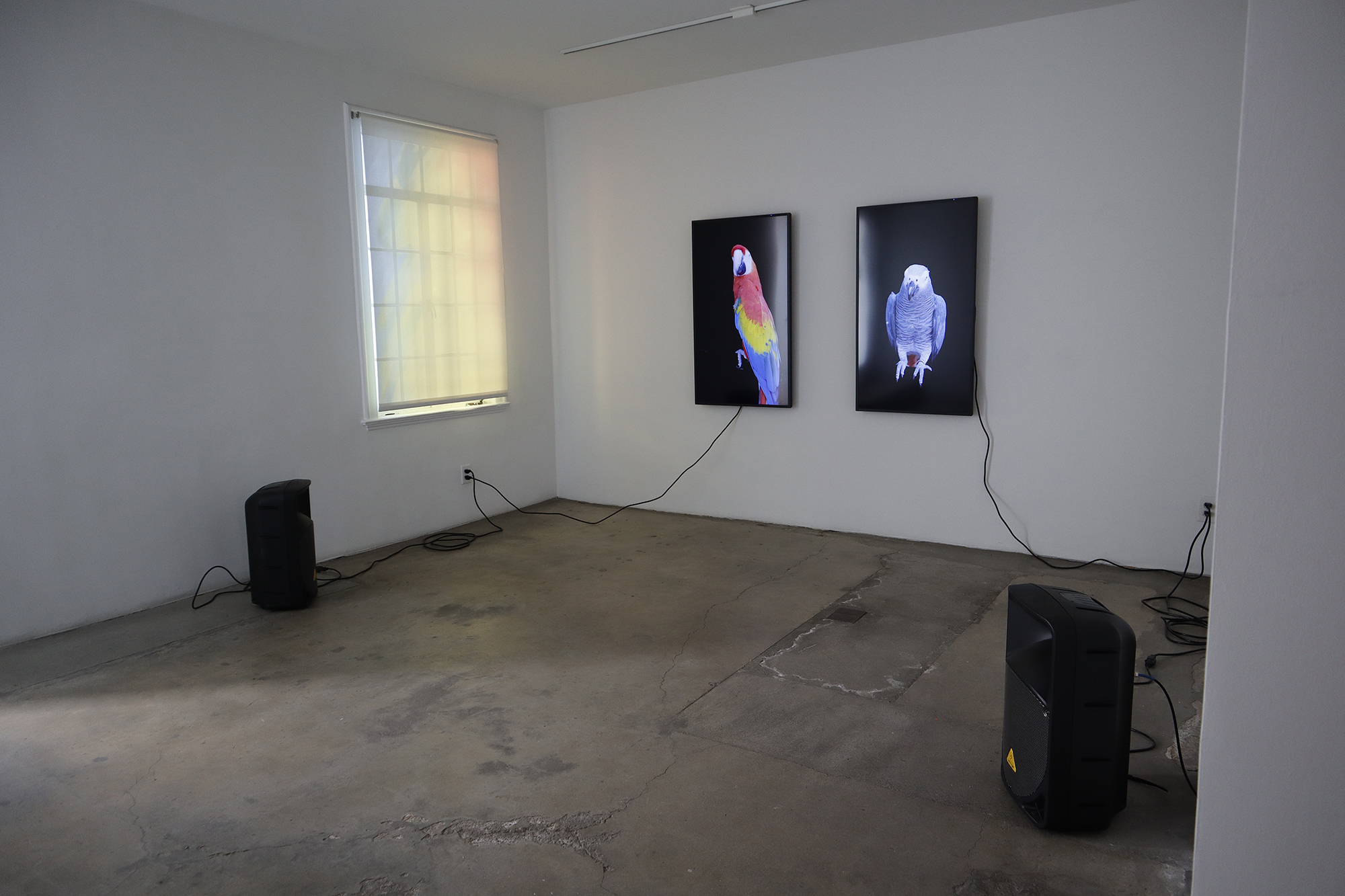 Complicating matters, each line is echoed in a different voice from another part of the gallery. Moving to the second floor of the gallery, one finds Listen to Us (2021, dual channel video/audio) a similarly constructed installation. Here, the two monitors face each other from opposite walls, and the African grey has been replaced with what is by comparison a diminutive Amazon parrot. 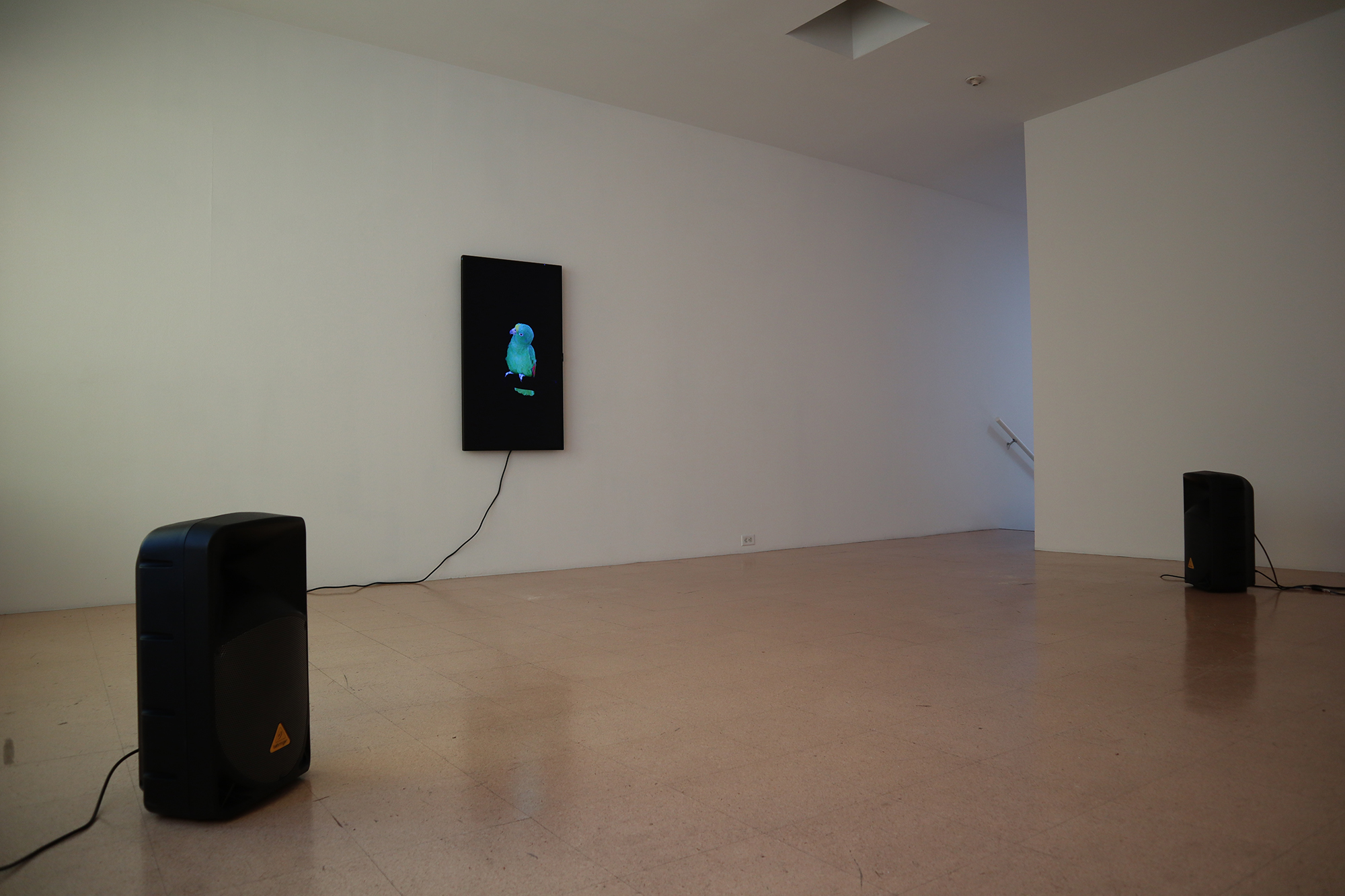 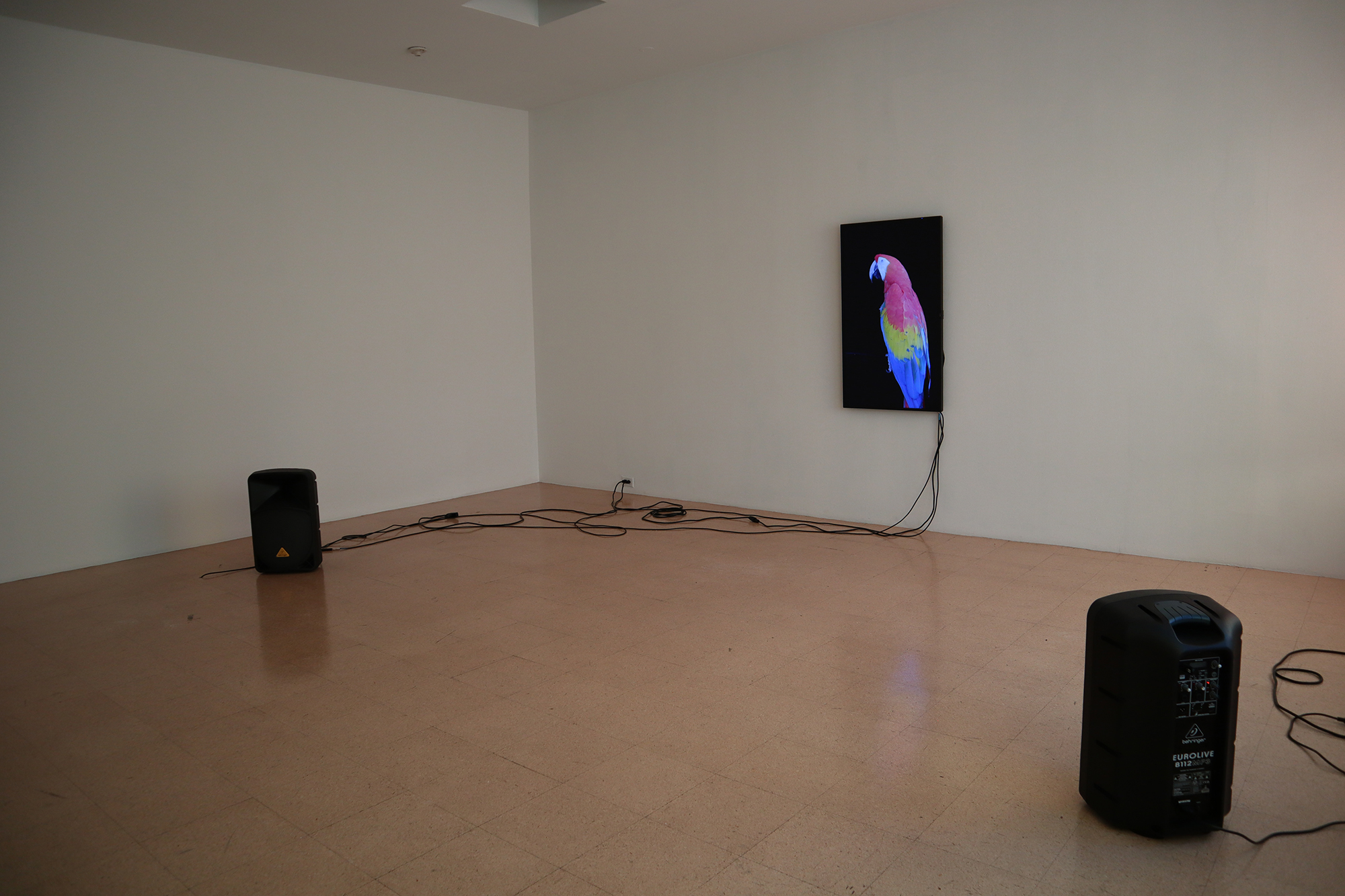 In both pieces, squeaks, whistles, and caws from a second speaker on the floor punctuate, interrupt, and distract from the spoken text. Is this background noise? A translation of the human speak into parrot squawk? Maybe the other way around? Or is the titular conversation between these two voices speaking in wildly different tongues? If it is indeed a conversation, it’s not one that is easy to follow. However, the rich color of the high definition video, the enveloping sound, and the scarlet macaw-colored gels covering the windows on both floors of the gallery provide an enthralling sensory experience to move through. We are having fun! 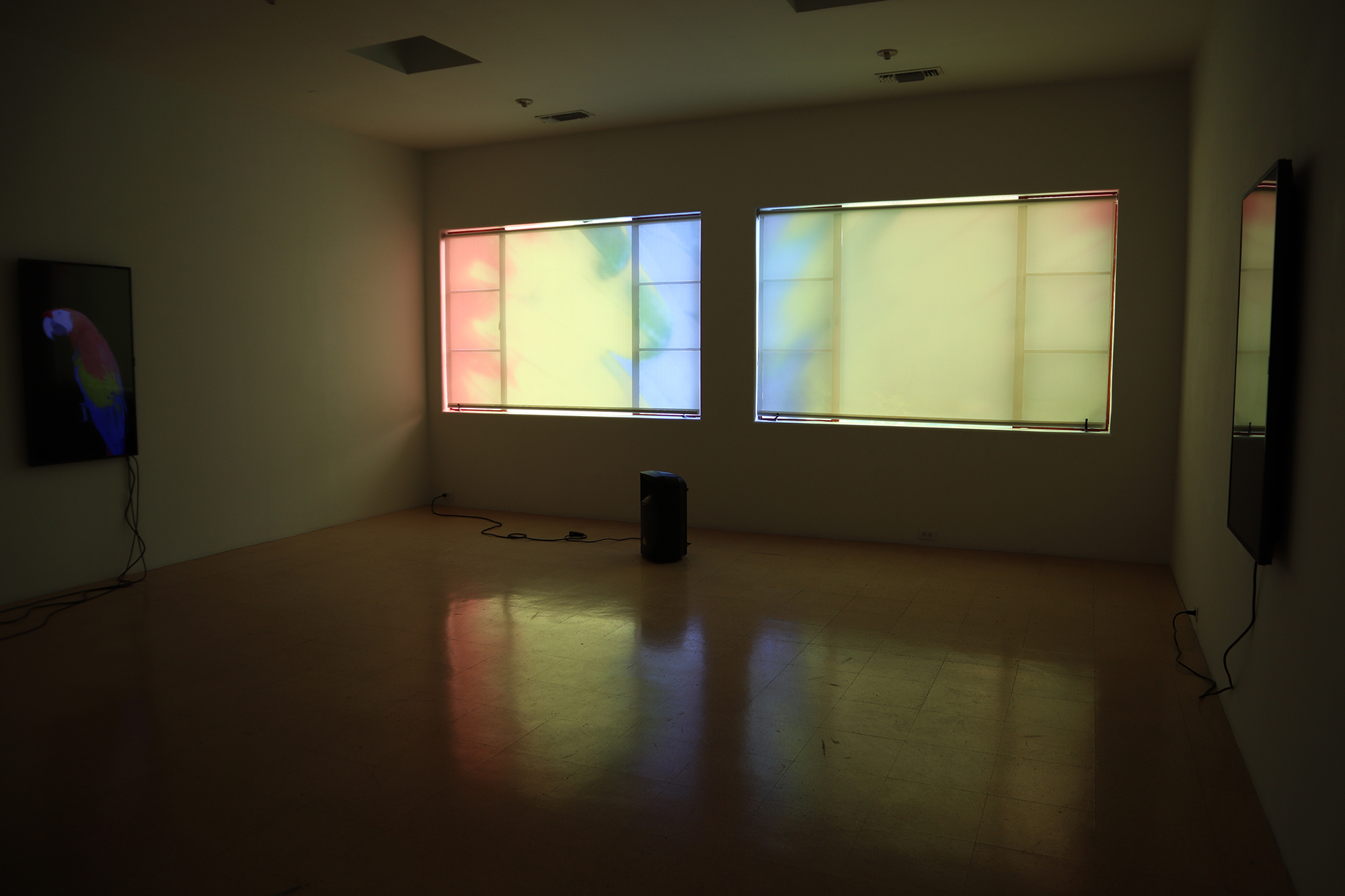 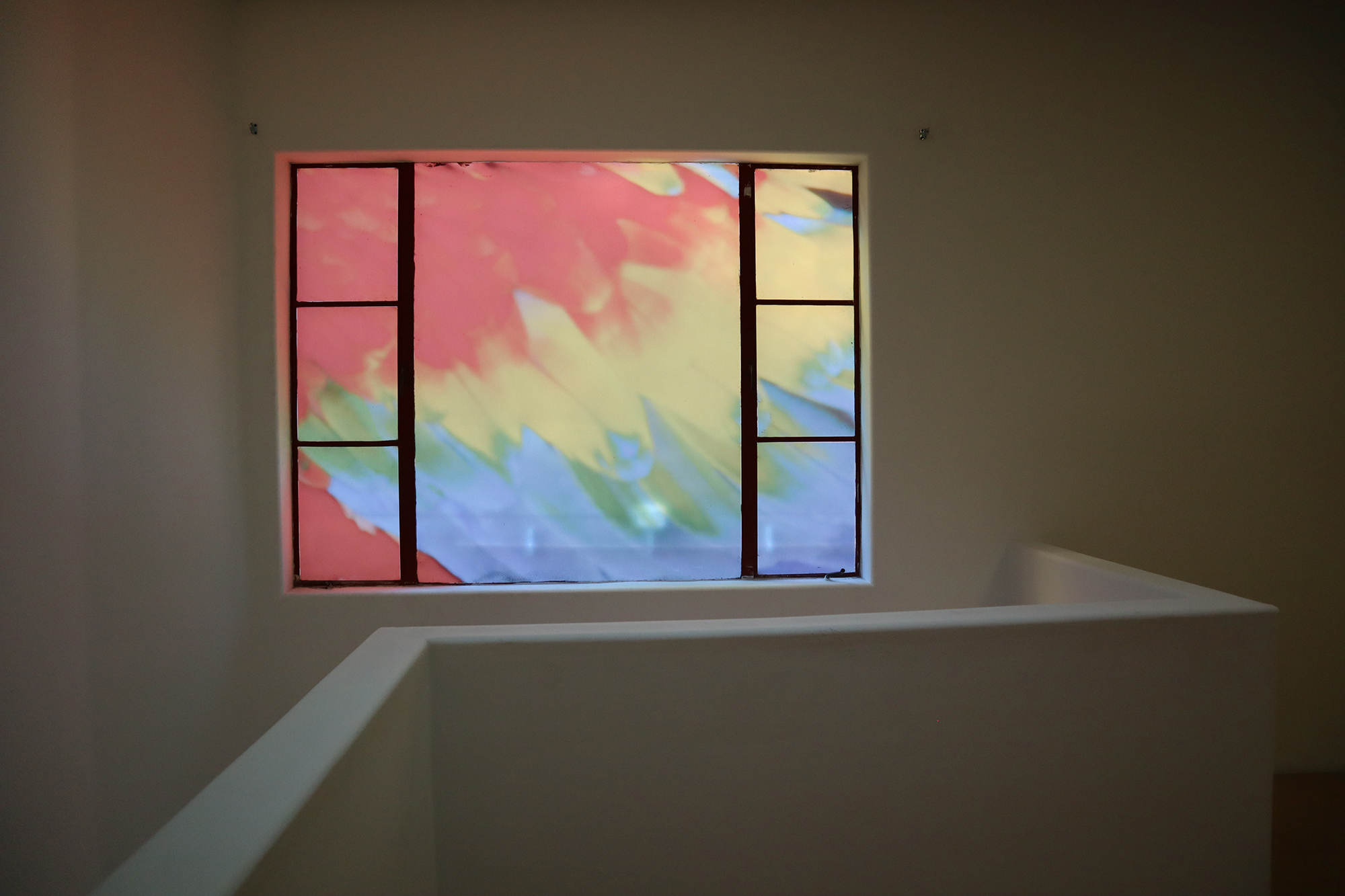 Beyond the fun, however, there are layers of meaning to unpack and to contemplate. For example, the conversation between human and animal is one that is fraught with difficulty. We speak for animals, and we talk over them. A conversation implies two or more parties that are equal in some way, and this conversation is held back by those who believe that between human and animal there is (to borrow a phrase from Jane Goodall) a difference of kind, and not simply one of degree. Additionally, the idea that nature is somehow “out there” and not surrounding us at every moment—whether in a gallery, at home, or in the outdoors—erects barriers to sympathy as well.

Thater’s work with animals has long pointed toward sympathy with the inhabitants of the natural world; sympathy that years of scientific classification and bifurcation have perhaps eroded in our culture. Layers of mediation and translation permeate the work, as do many of Thater’s video installations. She doesn’t shy away from revealing the technology that enables her immersive installations. Mediation itself is a key component to her thinking about the relationship between humans and the animals she films, whether it comes through a piece of equipment or through language itself. At this moment in history, the presence of the video apparatus may even heighten the experience. As so many of our day-to-day interactions with real people have been happening via screens, there is perhaps less of a barrier between mediated presence and actual presence. This lends the birds a sense of reality that viewers may not have been available two years ago. Even the occasional jump cut in the editing could be taken as evidence of a network hiccup rather than a preconstructed video feed. These birds feel both alive and live.

This also threatens to anthropomorphize the birds more than perhaps Thater would intend. Anthropomorphism is something Thater resists in her work, less the animals depicted simply become characters and not autonomous entities deserving of life and dignity. However, the piece never reaches the level of Disneyesque talking animals, and perhaps her close flirtation with anthropomorphism allows the viewer to realize how easily humans do the inverse—dehumanize one another.

One instance of this dehumanization is how in-power groups refer to displaced humans, be they refugee, immigrant, or otherwise. Here is another group that is spoken for, interrupted, and spoken over. These birds in particular provide an apt metaphor for understanding something about cycles of displacement. The birds are all labeled “exotic,” but are also common household pets far from their places of origin. These birds have lived through trauma due to commodification, abuse, and/or neglect. As birds living at the Intertwined Conservation Corporation as part of their avian rescue program, they are witness to just some of the horrors of global consumption. In the context of global climate catastrophe and the resulting ever-growing migration and refuge seeking, some of the dialogue (particularly “remove and replace”) takes on a menacing tone.

The connection to displaced humans is a parallel to contemporary society, and there’s a historical parallel one can draw as well. Birds remind us of a time when dinosaurs were the dominant inhabitants on the planet. That our current pending apocalypse is caused by burning the fossilized remains of that era as a fuel source has a certain morbid irony. Perhaps the tale of the bird is a cautionary one for us in the Anthropocene, one about how the mighty fall and the inevitability of change.

None of these interpretations are directly suggested by the work, but the balance Thater strikes between concrete language and vague context opens up space for multiple interpretations. The loop is only a few minutes long, enabling the viewer to hear the entire performance repeated for several rounds in a viewing. Recognizable sections emerge. A section listing action verbs (some relegated to human activity, some to avian activity “to perch, to stand, so sit, to lay, to throw…”) is followed by a listing of pairs of related words (“talk and listen” “up and down” text and poetry”) to a listing of the formal aspects of video work (“space time image color sound light”) and then a series of exhortations. The words, though vague, all relate to the installation in some way, be it the birds, the technology, or the title. Again, mediation itself is a key element to the work conceptually and formally.

There are meanings that are revealed via the initial unfamiliarity, and then others that are suggested only when one has a grasp of the cadence. Some phrases (i.e., “This is the good life”) are heard in varying degrees of sarcasm and earnestness. The copy seems as if it could have been lifted from a number of sources; one catches hints of Shakespearean text, Quentin Tarantino films, and advertising copy from the 1940s.  The work hints at didacticism without becoming overly teachy, and the experience of the language is a bodily experience above a textual one. After several cycles of the looping audio, the exhortation that stands out most is, “Get out of this room. Get out of my mind!” Point taken.

“The Conversation” marks a welcome return to the gallery space for Thater, whose 2020 piece yes there will be singing was only viewable via streaming online video. Whereas that piece indicated a certain silence from humans, Talk to Us and Listen to Us are a cacophony of sound, and a spatial experience that encompasses two floors of the gallery. In conversation as well as in “The Conversation,” we communicate with much more than just words. The work is neither overtly optimistic nor pessimistic; just indicative that the conversation writ large goes on, and that we all contribute, in ways wittingly and otherwise.