Thus Paul McCarthy characterizes the reaction to the work of Jason Rhoades in the mid 90’s Los Angeles. Though Rhoades lived and worked in Los Angeles his entire career, many of his exhibitions were exported to Europe for exhibition.

The problem, McCarthy continues, is that they couldn’t see the process, couldn’t see past the established tropes of fine art. In this work there is a lot to see, and a lot to see past. Beginning in the South Gallery, one encounters Tijuanatanjierchandelier (2006), the latest work in the late artist’s oeuvre. A network of extension cords crisscrosses the ceiling. The floor is sporadically covered by mats, blankets, and mattresses are arranged with goods on them in the fashion of a market from either of the two border towns referenced, Tijuana, Mexico and Tangier, Morocco. The goods range from trinkets, dolls, and toys to teapots, wooden spoons, knives and daggers, to plastic “truck nuts” and knock-off handbags. In between the floor and ceiling are suspended a number of ‘chandeliers’ made of up actual light fixtures, tourist trappings, and neon “pussy words” – Spanish and English slang for the female genitalia.

These “pussy words” are prevalent in three installations, fully half the exhibition’s six total. Additionally, these three installations also take on a foreign subject – the border towns of Tijuana and Tangier mentioned above in Tijuanatanjierchandelier; My Madinah. In pursuit of my ermitage…(2004) incorporates a mosque-like layout with neon ‘pussy words’ overhead; and The Black Pussy… and the Pagan Idol Workshop (2005) is laid out like a Middle Eastern bazaar. Each of these spaces make use of the neon “pussy words” in different ways. In Tijuanatanjierchandelier the words are intertwined with souvenirs and other commodities. My Madinah, In pursuit of my ermitage… provides a more contemplative space wherein viewers are invited to (with shoes removed or with covers) walk across the carpeted floor, lie down, and contemplate the neon words and associated taboos. The Black Pussy… and the Pagan Idol Workshop calls back to the history of the pre-Islamic Kaaba. Ancient idols are herein recreated incorporating mass-produced consumer objects, from hookah pipes, to cowboy hats, to dreamcatchers, and neon “pussy words.” According to the gallery’s wall text, the words in this installation come “from African, Creole, Cajun, Ebonics, and hip-hop dialects.”

It is one thing to be interested in slang, and another to focus solely on slang for the female genitalia. In an age of heightened awareness to issues surrounding ideas of appropriation, otherness, privilege, and patriarchy, it’s easy to dismiss the work of being guilty of all these cultural crimes. Rhoades draws no boundaries between the personal, the public, the religious, the political, or anything else. Indeed, one is always slipping into the next. It is this slipperiness – of words, of language, of signifiers in general – in Rhoades’ work that is worth exploring. Equally interesting is what is retained in each “slip,” i.e., what remains constant within recontextualization.

Rhoades does not simply blur the boundaries between the sacred and the profane, in his work the one actively slips and morphs into the other. The work exists on that razor’s edge where satire risks becoming the thing it mocks, that edge where fascination can slip into obsession, and celebration into objectification. Eroticization, exotification, and objectification all threaten from all sides, but Rhoades manages to successfully navigate the margins. The over saturation of the neon signs dilutes the impact of any one slang term. Some of the slang is derogatory, some is affectionate, most is just juvenile. We are reminded that sex sells, and also that when we say sex sells we take that sex object to be a woman’s body. Perhaps it can be said that it is the same male desire for sexual conquest that drives the system of global capital, and that the specific use of words for the female genitalia illustrate this fact most clearly. One wonders which has more slang terms associated with it – money or pussy?

For all of its non-conventional means, there’s a classical dialectical quality to the work. Rhoades manages to confound convention while abiding by it. It’s incredibly sophisticated and well-informed as it comes across as juvenile and ignorant. The installations, while appearing chaotic, are intricately constructed; especially The Creation Myth (1998). The sprawling construct includes stacked folding tables, a model train set, multiple TV’s and radios, logs plastered with pornographic images, 5-gallon buckets (lit from inside and printed with text that provides some kind of orientation to the work), and a machine that blows smoke rings – a stand in for the anus. The installation is a representation of the body, of mythological systems, or of a teenage boy’s dream garage. Again, it’s where all of these layers overlap and mix that the work is most successful. There is a method to the madness, though perhaps an excess of method is its own kind of madness.

My Brother / Brancuzi (1995) conflates certain modernist ideals are with common culture. Here again, we have a juxtaposition of a sacred (Brancusi’s modernism) and a profane (rural Southern California farm life). The result is both humbling to Brancusi and uplifting to Rhoades’ own humble beginnings on a farm outside of Sacramento. Elements of mockery nestle in against elements of homage, and call into question what endeavors are privileged and what are not. A stack of donuts draws a comparison between Rhoades’ brother’s desire to pursue donut making to the grand modernist gesture of Brancusi’s ‘Endless Column.’ Rhoades may have been fighting against traditional conventions, but again with a healthy respect for them. Again, we are incited to explore what remains constant within recontextualization.

The earliest work, Swedish Erotica and Fiero Parts (1994) is a reconstruction of an IKEA showroom using legal pads, pails, cardboard, scrap wood, and other detritus. Here we see the beginning of his highly associative logic, and experimentation with the malleable relation between material, form, and meaning.

Tricksters of mythology have always shown their love of a culture by way of mocking it, pushing it, testing it. In parsing these often distasteful gestures, the culture is made stronger. Jason Rhoades may have played this role from a place of privilege, but what better use of privilege can there be? 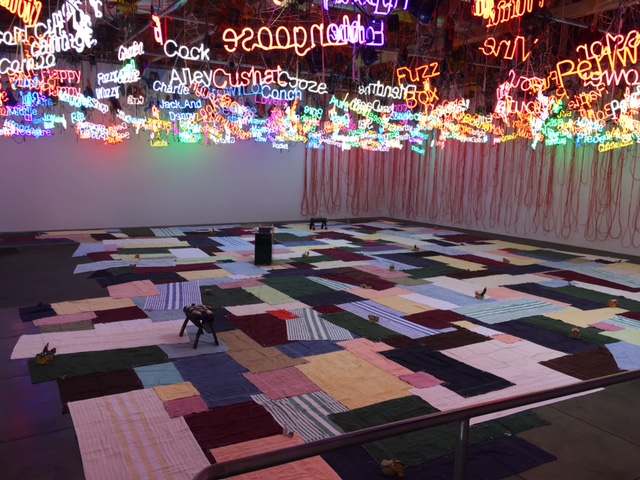 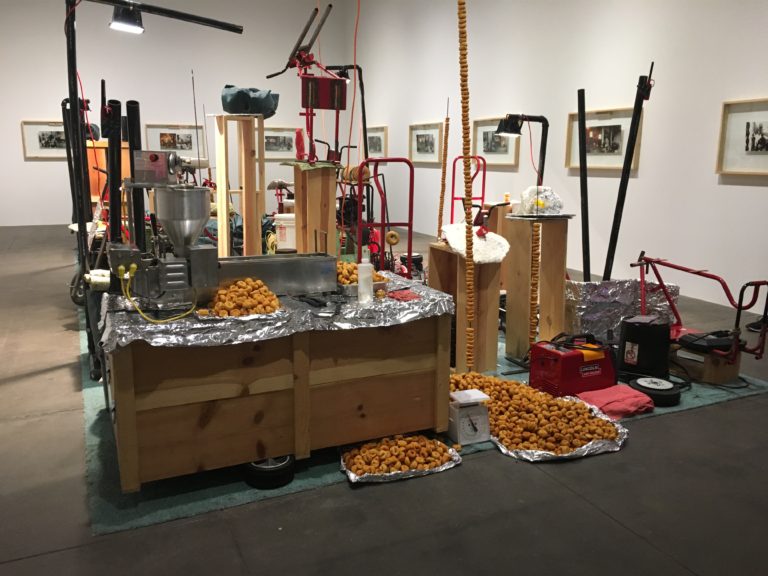 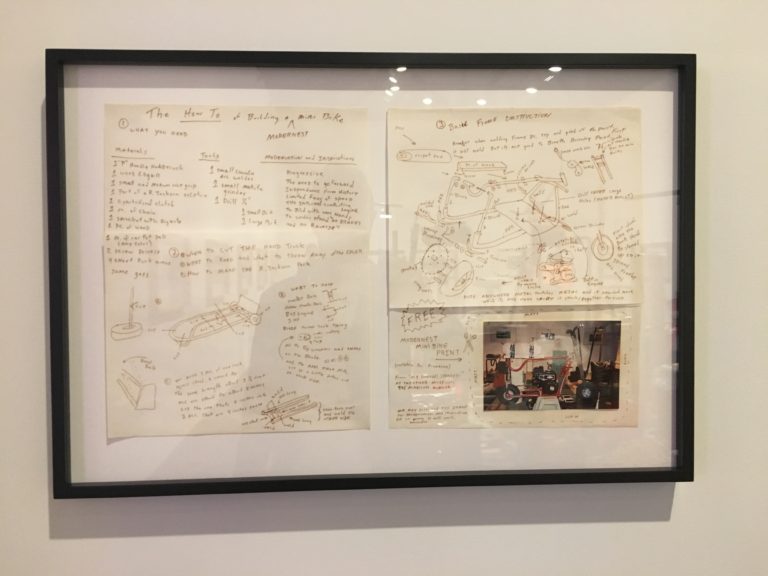 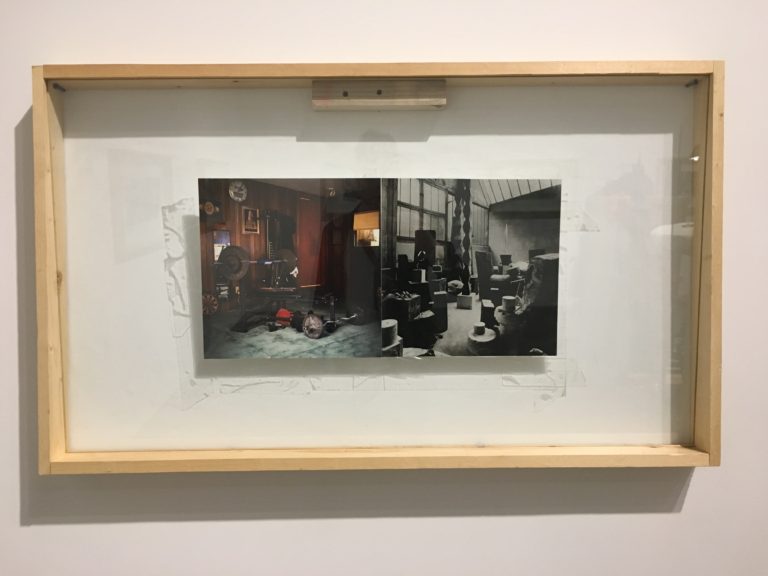 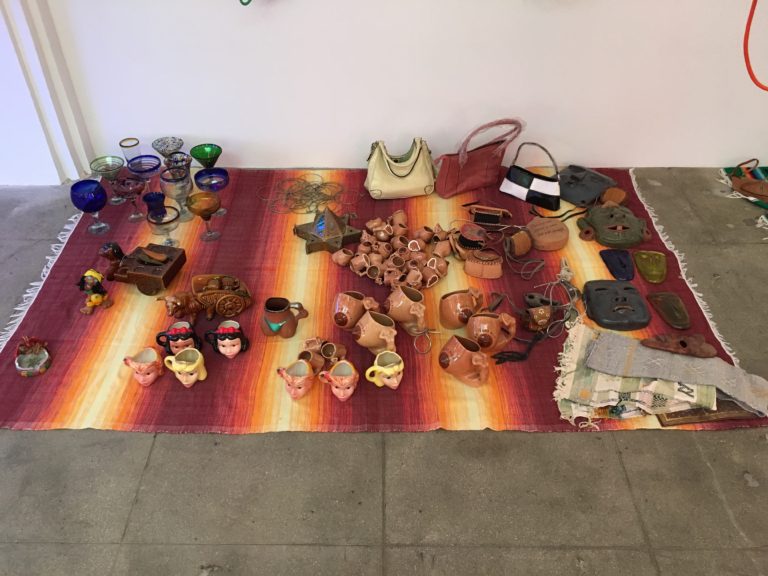 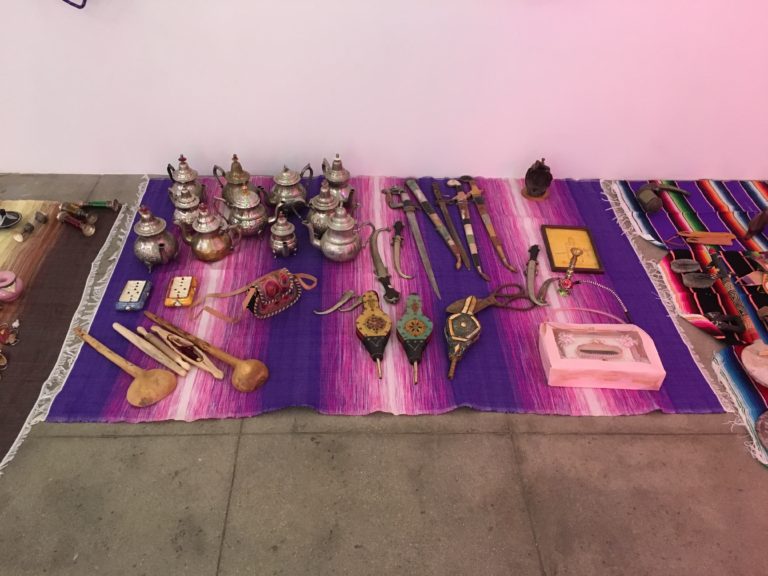 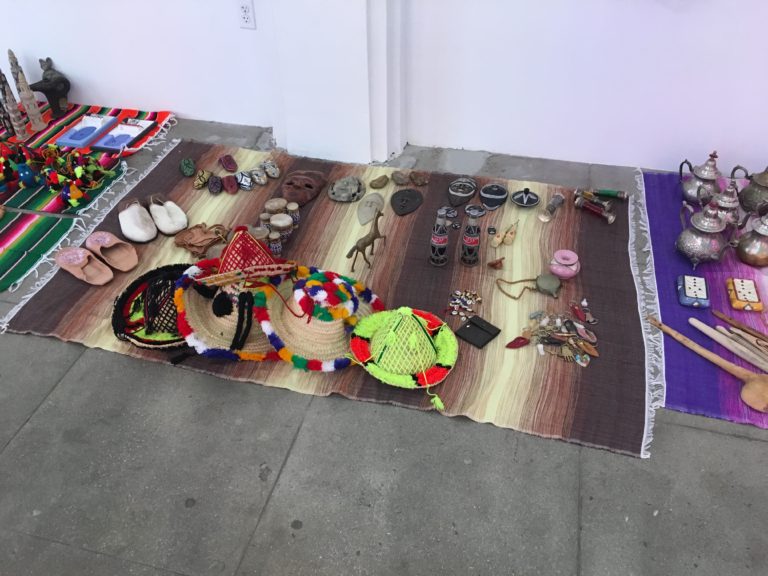 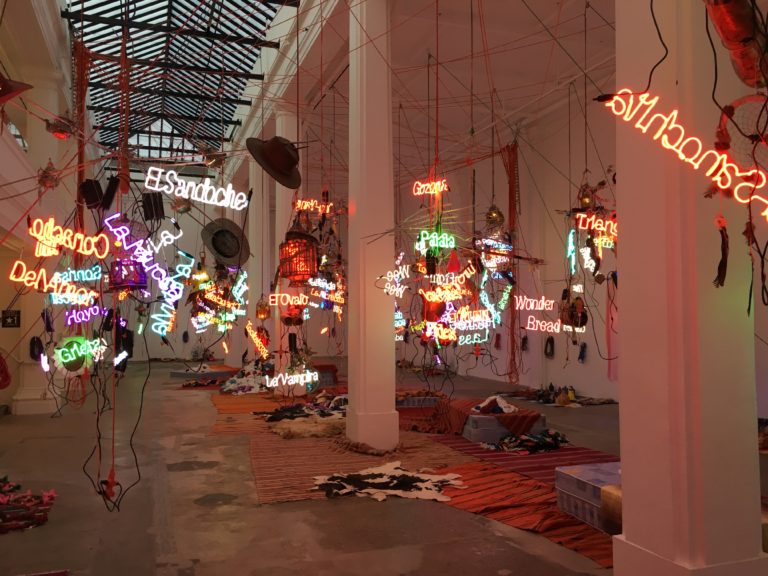