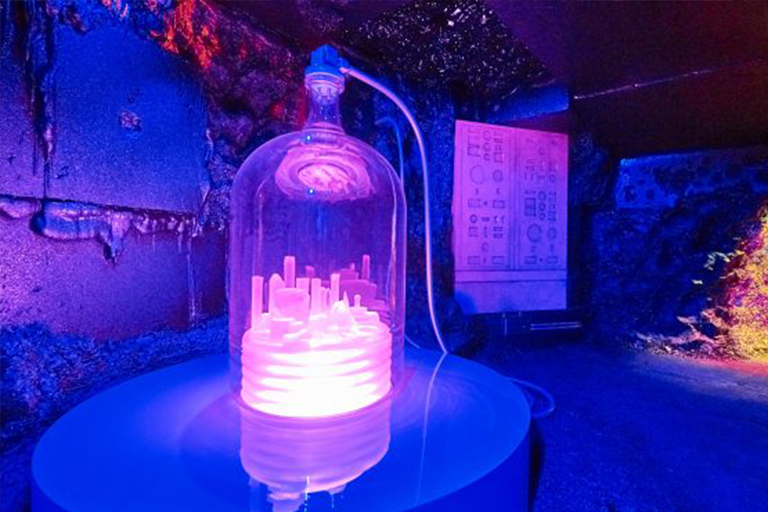 A planet destroyed, a city thought to be lost then saved. Preserved in a memory and observed through posterity.

Mike Kelley’s exhibition Kandors 1999 – 2011 at Hauser Wirth Los Angeles explores the spatial memory, relative to architecture and fantasy. Themes that Mike has been exploring in his earlier work such as ‘Educational Complex’ (1995). For those unfamiliar with the story of Kandor one must step into the shoes of the “Man of Steel” Superman. Shrunken and bottled by the villainous Braniac before the destruction of Superman’s home plant of Krypton, Kandor was later rescued and remains confined to its bell jar prison within the Superman’s “Fortress of Solitude” where it “functions as a consistent reminder of his past and a metaphor for his alienated relationship with the planet he now occupies.” (1)

This exhibition embraces the entirety of this body of work. From a collection of artifacts from Kandor-Con 2000, a project that consisted of a website in which information regarding Kandor would be gathered, from fans from which digital and physical versions would be rendered. In the same room 2 artists were silently reconstructing a version of Kandor with each piece being placed on a shared platform. In time a city will form. A poetic compromise to the original project. As I continued around the room, I felt a lack of continuity; a sort of cut-and-paste design of the city of Kandor. It occurred to me that there has been no standardized way of depicting Kandor – a kind of unwillingness to standardize the city in the story of Superman. As I entered into the next room, I was thrown into a myriad of 21 different glowing sculptural depictions of both the city and bell jars. In this room the cities are separated from their confined bell jars and allowed to float around the dark room, complicating their formal relationships. As I floated between the open city and the enormous bell jars, I became mesmerized and overly alienated at the same time. A feeling of internal unrest came over me, and the phrase “you [do]n’t belong here” began to creep into my mind. Slowly Kelley’s play of spatial memory began to set in. I felt thrown into a dream where I was observing a struggle to render a memory long forgotten. Gaining and losing detail with every revision, ironically further destroying the original memory and turning it into a fragmented reality. Here Kelley has turned a dream into a beautiful nightmare. This nightmare becomes solidified when you enter the final part of the exhibition – The “Cave.”

When entering this room, I was shrouded by the feeling of neglect. An ominous cave setting depicting Superman’s once imposing Fortress of Solitude. In this Cave it had appeared as Superman had simply walked away, leaving an orphaned Kandor behind. I walked around fragments of large black rocks and then I noticed a small cave–like cutaway. I peeked inside, and a glowing translucent Kandor survives. I crawled out of the dark tight space and began to walk around the sculpture. As I walked around I noticed chains sitting in close proximity to the decaying air tank supporting the illuminated and vibrant city inside. As I left the exhibition I walked away with an unsettling feeling.

Imagine walking through the mind of a broken superhero, scarred by a traumatic event and forever reminded of it. Unable to escape its captivity and ironically holding the dreamer captive as well. A sexually charged beautifully conflicted nightmare.