On the vacuum side of Rodeo’s looking glass, where monthly rag ad wings melt Medusa exposures back into snaking volumes, luxury habits alight stork-prized. With vertiginous tip-toes anchoring still life into breathless flatline, the lithe disporportions angle all akimbo, as if paper doll reflections from the outside might measure eyes and purge sizing altogether. Inarticulate joints pinch both hand and stitching for Daguerrean diorama, fusing staged tactility to canvassed structuring, while weightless surfaces echolocate “Marco?” listlessly “hollow” through the closet hangar.

Posed to superimpose, the monotone contour and unblinking glare has long since sacrificed sight to surveillant convenience above, as godless fly eyes freeze-frame and feather your prefab shopping procession in digital tar. Remote skies know the bottom line is already above financed installments, as syncopated foot traffic snaps back sycophantic face recognition like Andrew Jackson craning his watermarked neck into fluorescent illumination. Snapshot, march on. With sun as measure, Daedalus laments our yearnings beyond the material maze, suspending the made-to-measure soul between glassine gravity and fathomless sea.

Light & Space artists likewise hung their hats on phenomenological footnotes, but maybe here in the upper atmosphere, inanimate minions swindle Siren visions, enchanting Icarus to accessorize. Does muse prostitute as drive-through in Wells Fargo’s shadow—where a filthy gr€€n lollipop or stale bone for the drooling dog in tow might be funded by the 0.01% interest glossing over a statistically minor, negligible outlier—hosting this investment confession to an automated 1-800 redirect? “Please hold.” You might still wander in for the free sample, even if one overdrawn fee has you submarining with a tin penny pig for another decade. “The next available customer service representative will be with you shortly.” Smelting false idols to toast to the high rollers, we all get more than what we pay for at Gagosian, which is generally nothing. “This call may be monitored…” So consider that the phenomenological interest accumulating in line to use the lavatory (door A or B) might exceed the standard course served by the food truck out back. You might shit like King Midas in the Golden Triangle.

But before flushing conclusions, the jackal-headed Anubis stalks Camden’s facade frosting, weighing souls against feathers, as mullions unreel duck-duck-goose headshots of both spectacle-devouring peasants and gold speculators alike. The glamorous goose usually dolled up by a ghost’s sheet, swishing to and fro without eyeholes, has either migrated or is moonlighting as the junkie by the bus stop getting his midday fix under an asphalt grayed down blanket. We envy both caped crusaders’ command of space and wonder if the tenting strategy, as tablecloth dervish or sidewalk tectonic, might buffer the claustrophobia. Porcelain eyes dilate from swansong posturing, a flightless hiss unwinding tick-tick, with crystal gears grinding baubles against drywall and pump strut ringing concrete alarm within.

The bank teller’s bunker (or reception desk) immediately folds a switchback towards the vault, extruding the standard brow height counter permission to remain aloof straight into a wall, and insuring the autograph book is linked to surveillance footage. Discerning cranky investor from loiterer likely prevents the staff from being outsourced by

animatronics, though being caught profiled between the crossfire entry axis and occasional stairway has probably machined away any napping on the job. Despite the wartime entrenchments, the infantry is either getting their beauty sleep elsewhere or extracting secret ingredients from the rationed free sample lure back a block and a half. But any salutation to their point blank salute warps anticipation around the corner, drawling from a sideways nod into the cattle pens, “Go thattaway.”

It’s the right/left mirroring of the silvered wares on display—strategically levered like dessert spoons catapulting main course leftovers across the table—that alienates the observer. Suspended on surface tension like a fly imbibed by reconstituted soup, we wonder what road rage would taste like in gallery space, and how much the guy who cut us off texting was taking in commission. Eyeing the insect twiddling its thumbs on Daniel Turner’s stainless steel Untitled troughs, we likewise wish the bloodletting would begin. The flavor of this group show has us all abuzz with dumb questions.

“Ranging from x-ray vision to astral projection and the cosmos, ‘CLEAR’ treats translucence as an avenue to transcendence.” Ok, cool, but now my silver cord has a finish fetish. Who’s the father and where’s the umbilical scissors?

Jason Metcalf’s polished “aerospace on stainless steel,” plunging through the wall from North to South gallery polarizes a debate with the security greeter on just how one might Google “aerospace” as a material, not an industry. Bleeding the cheat sheet, we forget material metaphysics have clotted more than Mom and Pop’s cottage cheese industry with preservative time stamping. Just how do you keep “aerospace” polished? Though Sitka spruce may have once qualified for Howard Hughes’ gooseness, we’re left to trust that Metcalf’s piercing is transcendent tech, like Michael Craig-Martin’s oak tree distilled into a glass of water. Such is the knock-knock script that stays thirsty until door- to-door evangelicals evaporate, from a height that even Air Maxes won’t clean. So we call bank shot on Dan Colen’s trained glass backboard shatterings, bounce around by the rubbernecking bottleneck beneath the leafless tree, and take metaphorical shade in the most mundane approximation of near-death tunneling, Gianni Motti’s black box video projection.

Though Ingo Swann’s adjacent exhibition centerpiece hardly declassifies CIA remote viewing research with its bug-eyed 70’s psychedelia, Motti’s mall-walk marathon through CERN’s Large Hadron Collider asks the vagrant to adjure its seventeen mile circumference, wondering whether the 5 hour, 50 minute cliffhanger will be looped. Even if there isn’t a Gatorade shower at the end, his white construction zone hard hat is the new black of bang you head against the wall conceptual conundrums. In HIGGS— Looking for Anti-Motti we see nothing but God’s backside. Maybe it’s better to just play green screen weatherman against the clockwork backdrop, or dance irreverently as science attempts to trigger the next Big Bang. We act out a few skits for our own extrasensory mobile laughtrack, trying to recall which philosophical heavyweight scripted the end of thought near Geneva, and if he was a self-splitting suicider.

besides the droll physicality reflecting our opaque bodies. Everything must be better warped in shiny. With decibels from the firing squad echoing bullet holes on Julien Bismuth’s unframed Abîme, and the gyrating next-gen Jetson disco balls reading like Westwood’s World’s End clock running backwards, we know we’re not the only ones counting down the expiring meter. With a nod to Piero Golia’s Clone (Untitled) and its omniscient yellow glow we duck duck duck out the alley, quacking sublime illumination. Ingo Swann, if your projected spirit is watching, pray tell how this remote viewing business and the surveillance regiment flashing at Rodeo and Brighton might be redeemed by ESP research? At least behind the seductive facade, Motti’s blinders keeps high horse at a haute ecole piaffe, for eyes to train clockwise into the perfectly keystoned present. Because the Light & Space declassification is less clear to the rest of us. 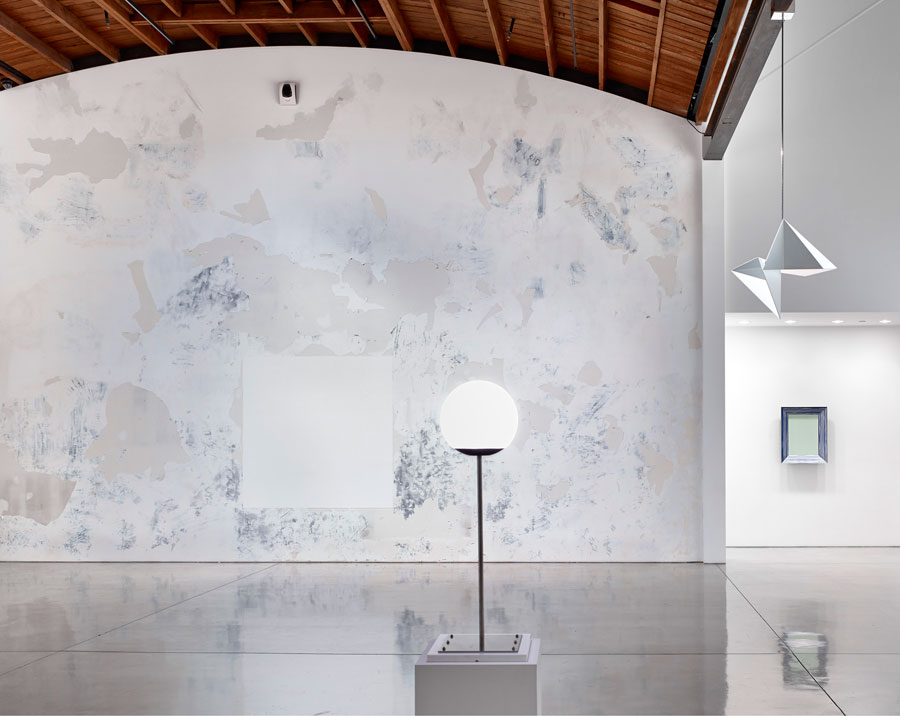