Banners on buses advertisements on streetlights flooded the city of LA to welcome the most extensive retrospective exhibition of Mike Kelly. This highly anticipated and deeply emotional exhibition which opened March 31st and runs till July 28th is an overwhelming retrospective spanning from his early drawings pre Grad School to “Homestead” a public art project that hosts social services and community initiatives while in L.A. The retrospective began last fall at MoMA PS1, the Museum of modern Art’s outpost in Long Island City, N.Y., The show was an amazing success providing a multilayered context that illuminated his art.

When the show arrived to L.A. The MOCA curator Bennett Simpson added several works not seen in L.A. When you walk into the museum every inch of it is filled with work, you immediately encounter a maze of sets and videos throwing you into the mind of Mike Kelly.

I had the chance to go on a tour with Bennett and he discussed the exhibition and how the wide- open spaces of the Geffen warehouse, can accommodate multiple works together, allowing for surprising visual connections to crop up. The exhibition could be described as having a morbid fun house feel grouping the show not chronologically but by discrete bodies of work. Creating connections that might possibly be looked over if exhibited chronologically.  Not to say that the exhibition had no chronological order.

Kelly, in all of his crudeness, was an intellect and not just any intellect an artist able to tease out many motifs and themes in unique and intriguing ways. He often returned to themes such as childhood, sentimentality, social and academic institutions – especially school and church. The exhibition at the Geffen helped underscore his art’s ricocheting resonance.

Throughout most of his career Kelly told stories in his work the truth of which matters less than that he kept telling it. The question I kept coming back to is what is that story? Take for instance Educational Complex (1995) where he constructed all-white architectural models of schools he attended, based only on memory. The parts he couldn’t remember he left blank, the suggestion being he may have repressed whatever happened there. In this case it’s a story about the untold story. Leaving blank spots for a viewer to fill in with there own interpretations of or about Kelly or there own experiences about school.

10 years later Kelly returns to the themes in Educational Complex in Day Is Done (2004–05), a 25 video installations based on found photographs of extracurricular school activities where Kelley would look through high school yearbooks and find odd, ambiguous-looking images of student activities, and then let his imagination go from there. The videos are a campy blend of horror and pre-internet high-school aesthetics: vampire as school administrators making phone calls in the office, children singing in a Christmas play, an operatic mummy. Their source material and content is unquestionably lowbrow. The sets, meanwhile a doorway marking the entrance to a terrifying barbershop, a model country house, and a gravesite are simple but meticulously constructed. The installation of them together makes for a chaotic, curated carnival that’s immersive and off-putting, earnest and ironic.

Continuing along this thought outside of the exhibition I had the fortune to view Kellys Homestead video works. I bring this up because I feel it has direct relationship to the themes in the exhibition of childhood, sentimentality, as well social and academic institutions. In this piece he returns to a place of childhood in Kelly’s history similar to Educational Complex and Day is Done. The work consists of 3 videos; I was only able to view 2 of them. The first film documented a journey going West on Michigan Avenue from Downtown Detroit to Westland with intercut interviews with some of the inhabitants and workers who occupy Michigan Avenue. The second video documents the journey Going East on Michigan Avenue from Westland to Downtown Detroit with similar intercut interviews. Kelley interweaves a narrative between the fascinating and bizarre characters, drawing the viewer into the incredible, sometimes shocking and other times ordinariness of peoples’ lives. This work initially was quite different from the previous works from Kelly. It was more generous, more ambiguous, and less provocative yet still very powerful. It seemed to concentrate more on sentiment as a driving force in the work. Like Educational Complex it has a generous quality allowing a viewer to fill in or in this case relate to the films content leaving plenty of room for interpretation and contemplation.

The gravity of a show such as “Mike Kelley,” which delves so deeply into not only the succession of works but the poignant and nuanced ways in which he thoughtfully wove the fragility of childhood, the plasticity of the facade of mass culture, and the dark and secretive sides of life that exist in plain sight, into his bright, sardonic, and playful compositions is undeniably felt on a number of levels. There is even in fact an underlying dialog between Kelley and his subject matter that seems to suggestively become more and more pronounced as we see him pick up imbricated sets of social issues and aesthetic ideals over and over again in unusual and engaging ways. 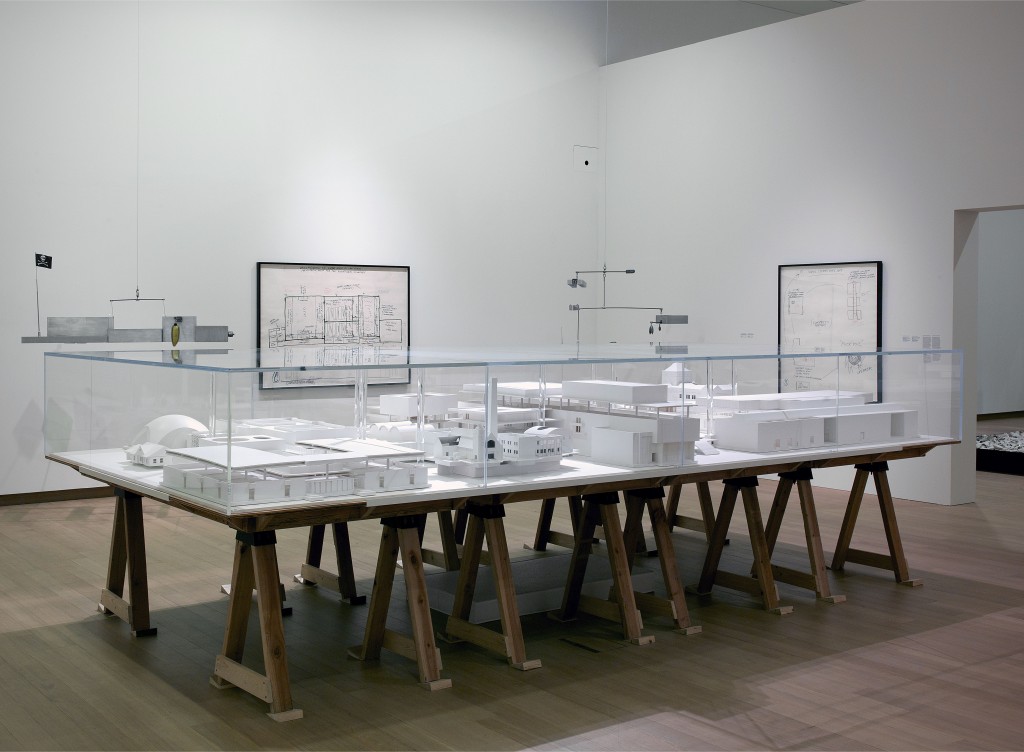