“A Rose By Any Other Material Language…”

Two shows open at Hauser With & Schimmel this weekend, ‘Schwitters Miró Arp’ and ‘Isa Gengken. I Love Michael Asher’ both center on artists exploring various material languages to deal with worlds in upheaval.

The work is hung with a loose chronology, focusing instead on developments in material use. Roughly speaking, it starts with more traditional painting, moves in to collage, and then into assemblage and wall relief. Joan Miró’s desire to “assassinate painting” sits comfortably with the object language developed by the Dadaists Kurt Schwitters and Hans Arp. The violence inherent in the phrasing of Miró’s statement calls back to the ravages of war, and reminds one of the distinctly anti-war sentiment the Dada movement embraced.

Much of the work is hung in close proximity, resulting in a collage of collages or an assemblage of assemblages. Miró has a few pieces set apart, including Painting (Birds) from 1927 [Fig 1], and one wall that includes Sobreteixim-Sack 10 from 1973 [Fig 2]. This piece, a painted sack hung on the wall, to which are affixed red wool and rope. The piece suggests a literal assassination, and is perhaps as close as Miró would come to achieving his desired assassination of painting. The show is not without humor, and the Dada fixation on absurdity is seen throughout the works by Schwitters and Arp. One section in particular, containing 5 Arp wood reliefs and a Schwitters assemblage, has the work hung going up the wall nearly to the ceiling – a call back to how Arp himself once had the works hung. In this way, curator Dieter Buchhart re-engages with the radicalness of the artists, and does not simply represent it.

The result is an historic exhibition that feels fresh and contemporary – active as well as retrospective. The show comprises over 90 works and is meticulously curated, but avoids feeling overly academic. Paintings, collages, and assemblages are hung around a grand plinth showing sculptures from the artists. The show strives to engage in a re-evaluation of these artists and the material language they instigated. The main gallery Hauser With & Schimmel provides an ideal venue for such an endeavor – one can see with a single turn a range of works from as early as 1914 to as late as 1973, and take in the whole scope of the project at once before diving into the particulars.

This same drive – to seek a language of materials that allows for the renewal and transformation of artistic expression – is on display in ‘Isa Gengken. I Love Michael Asher” as well. The exhibition is across the courtyard from the main gallery, a courtyard that includes an Arp sculpture as well as Isa Genzken’s Rose III . [Fig 3] Arp’s is a 2-meter tall bronze that feels at home in the concrete courtyard. The Arp demonstrates his overt simplification of forms, while Gengken’s Rose is an exaggeration of form. Though large in scale, the piece barely peeks out from above the walls of the courtyard’s concrete and steel i-beams. The zig-zagging rise of the steel column has a certain awkwardness, and this giant rose is a figure that seems confidently unsure of exactly what it is.

One can see the influence on her by Asher’s life-ling project of “dislocation”, a particular form of institutional critique that disrupts via architectural interventions the assumed neutrality of the gallery space. Genzken’s own “dislocations” – a dividing wall from her studio, her effects lining a gallery window, and elements of her studio on display in the gallery bring the artist herself into the work, and the many reflective surfaces involved constantly remind the viewer of one’s own presence in and the context of the gallery. [Fig 4] [Fig 5] [Fig 6] It is a disruption of the gallery environment that finds underneath a human element. Her installations of mannequins suggest an exclusionary element, one line of adult-sized mannequins stares over a line of child-sized figures [Fig 7] [Fig 8], while another groups comprises an inward-facing circle [Fig 9] [Fig 10]. The viewer, rather than being engaged by mannequins as she would be in a retail space, is kept away in a way that suggests the many forms of alienation inherent in a system of global capitalism.

One can’t help but recall the Bertolt Brecht quote, “Art is not a mirror held up to reality but a hammer with which to shape it.” Isa Genken here shows what a powerful shaping tool a mirror can be. 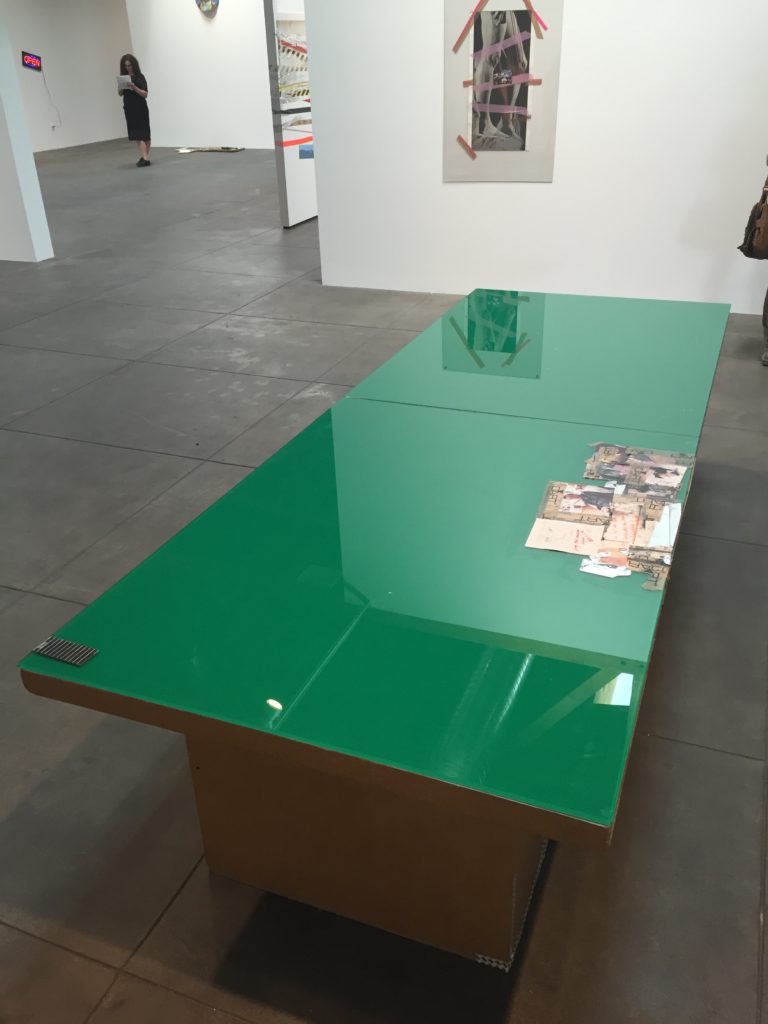 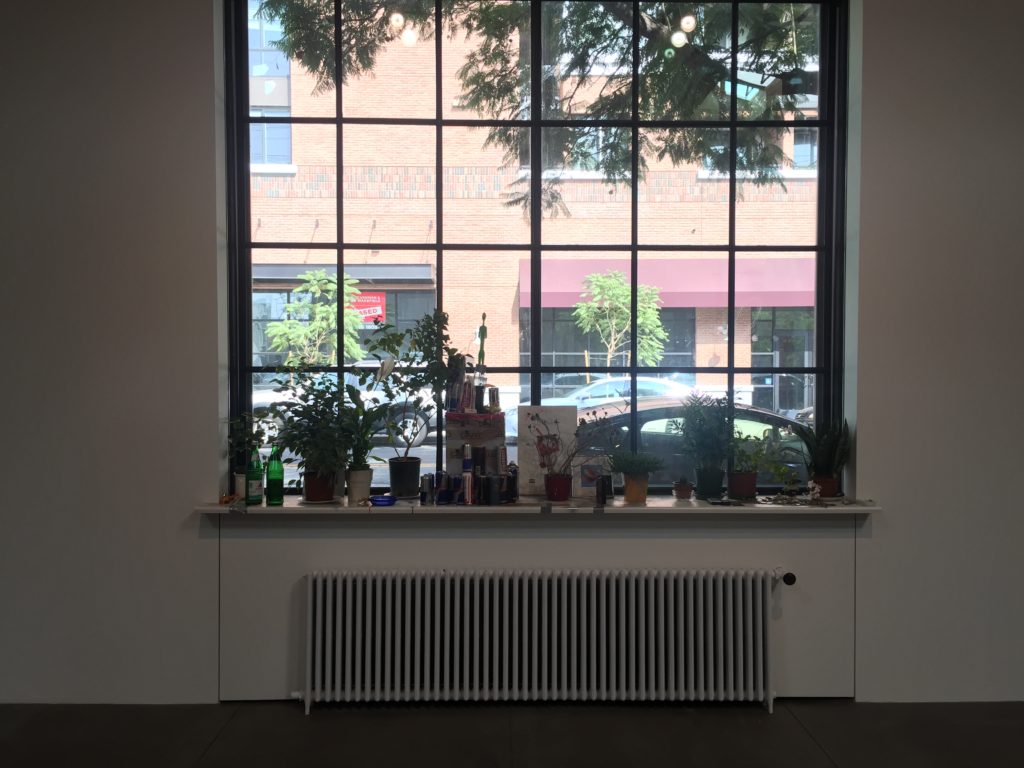 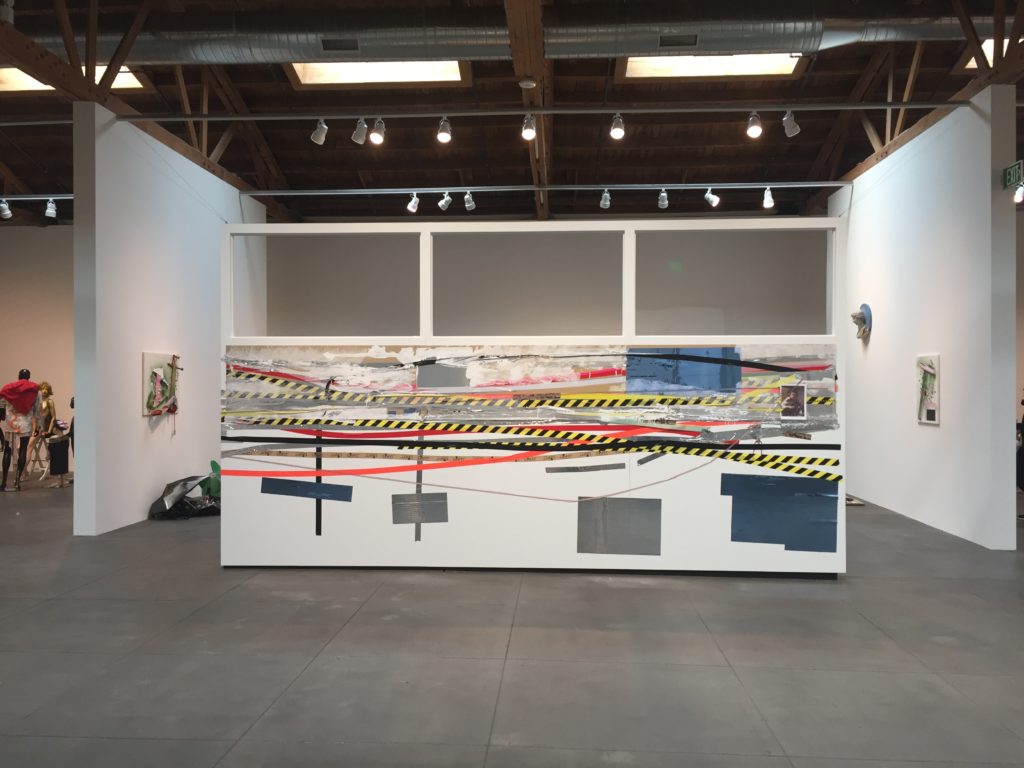 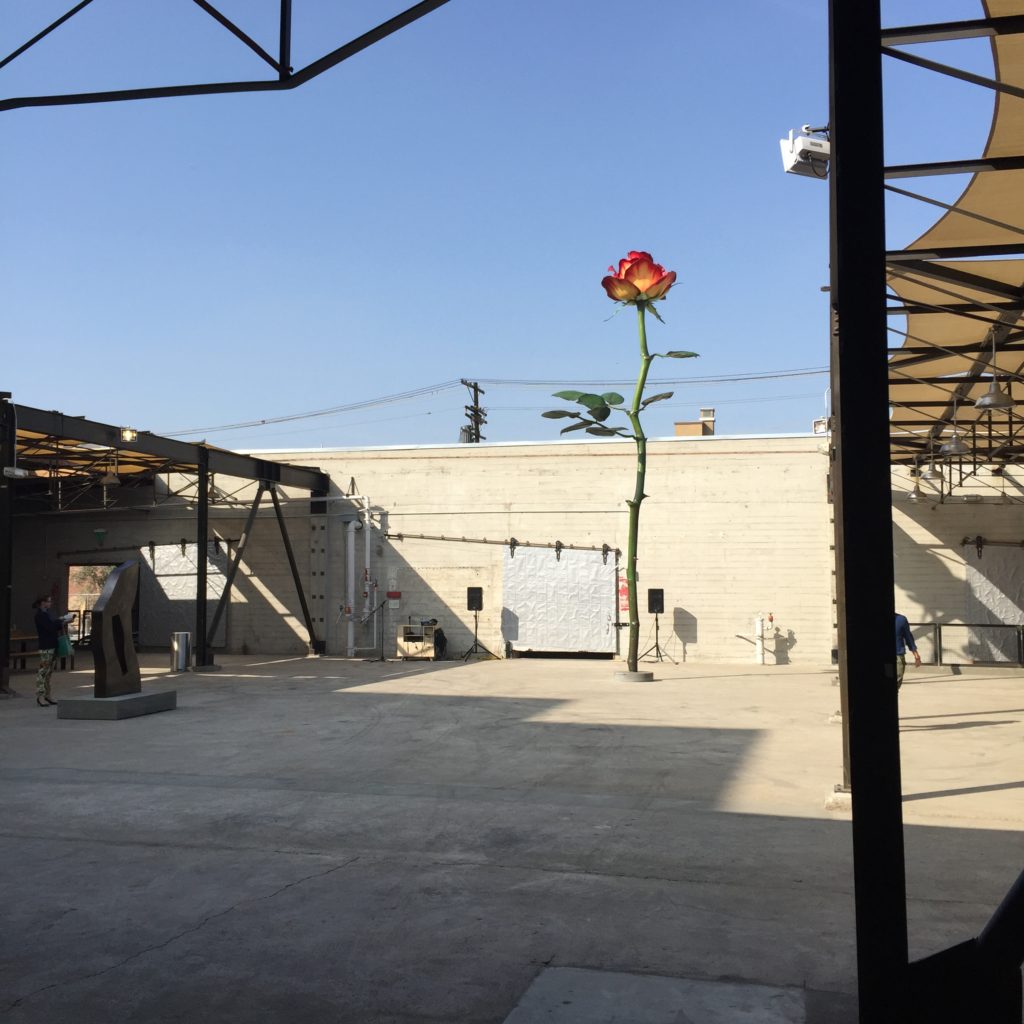 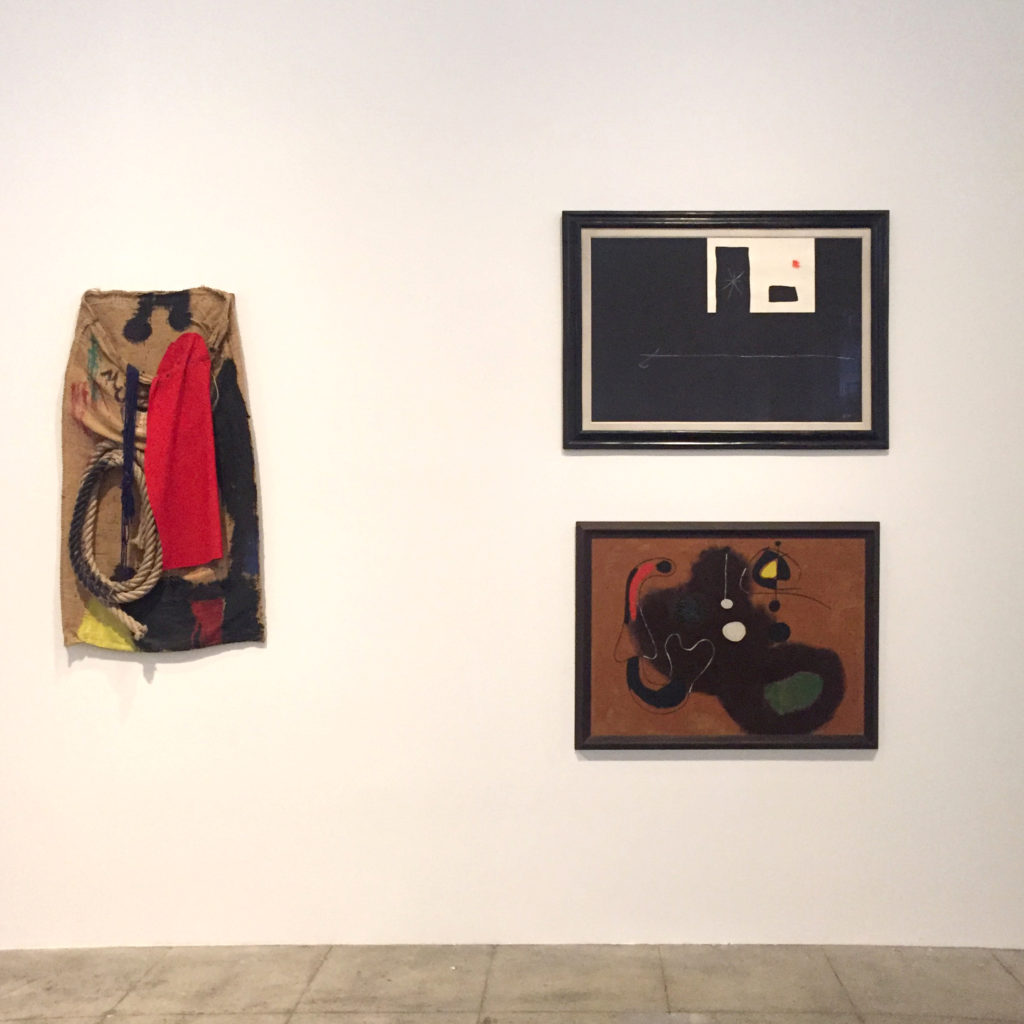 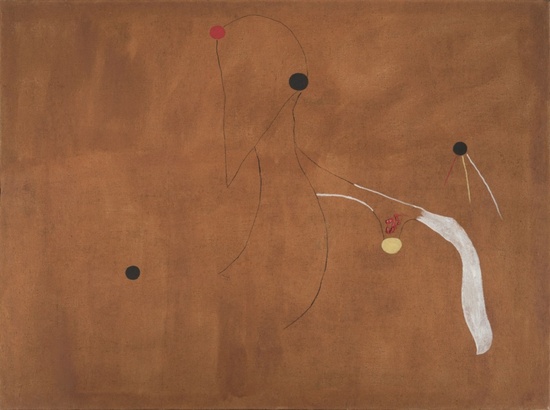 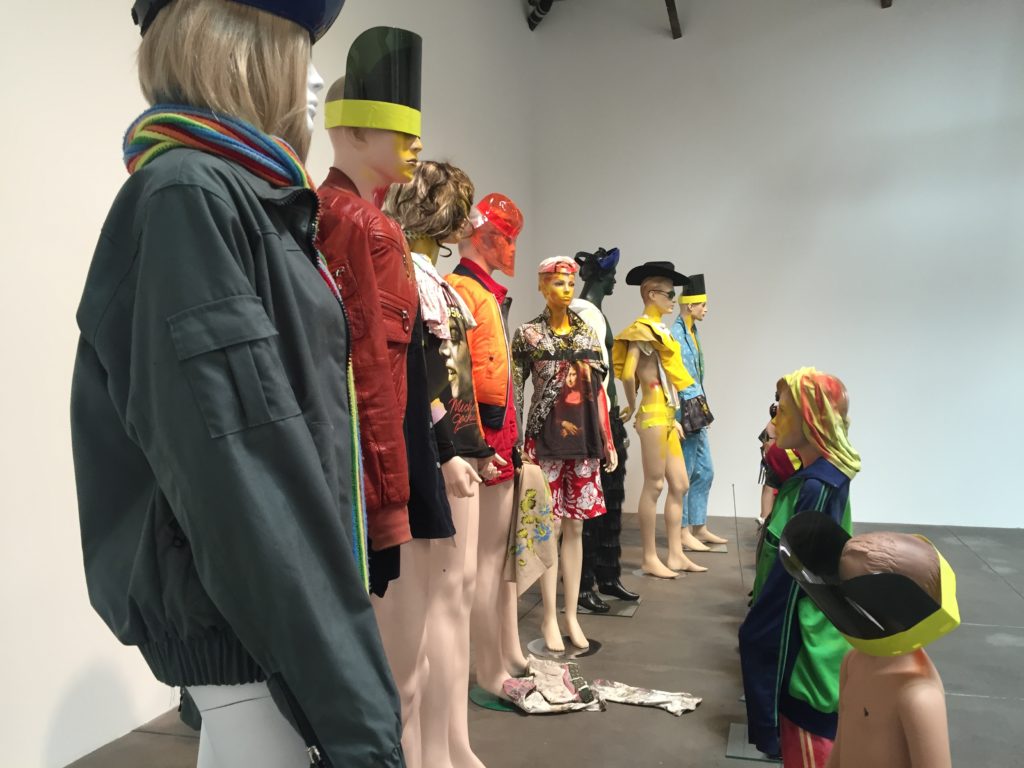 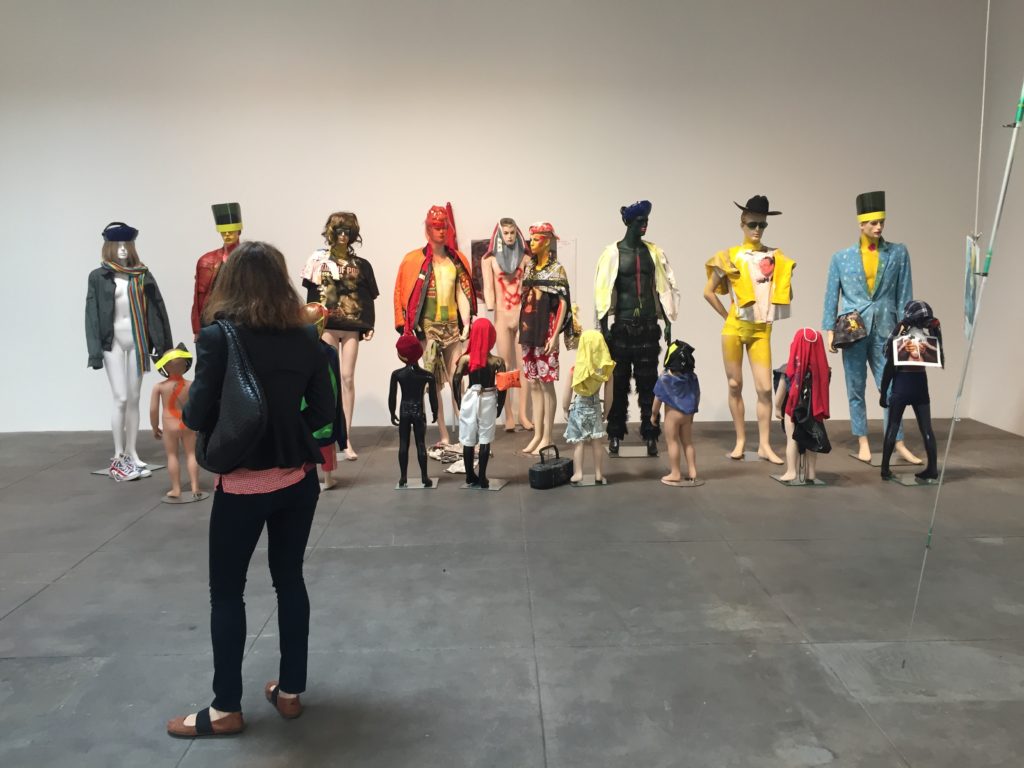 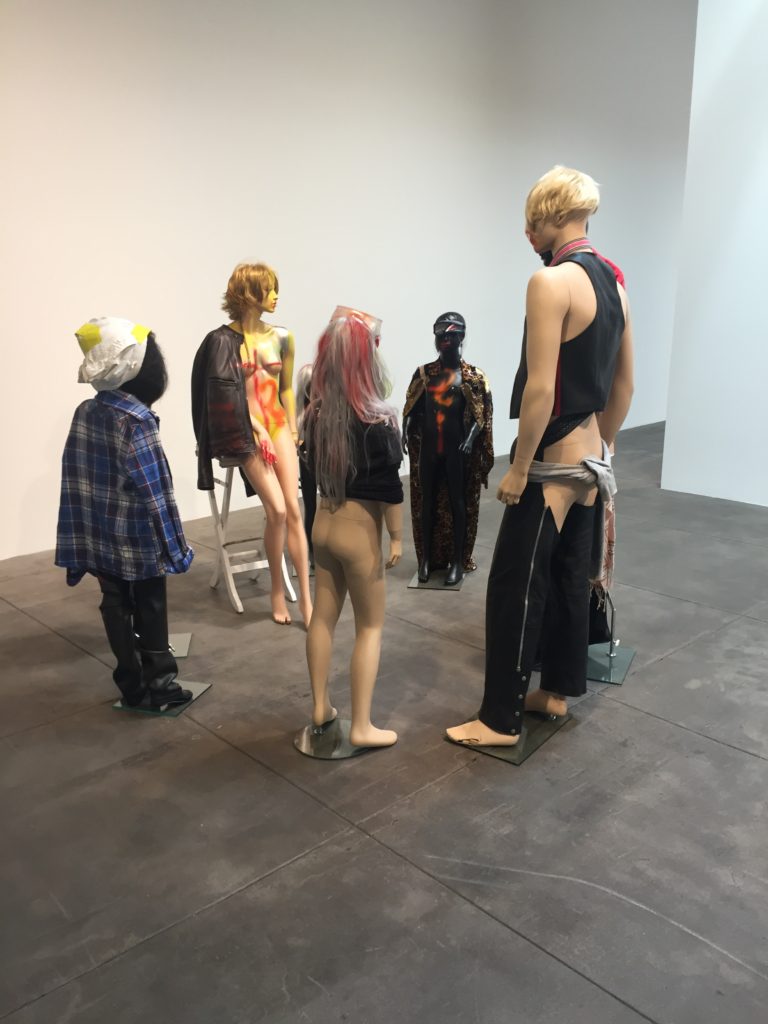 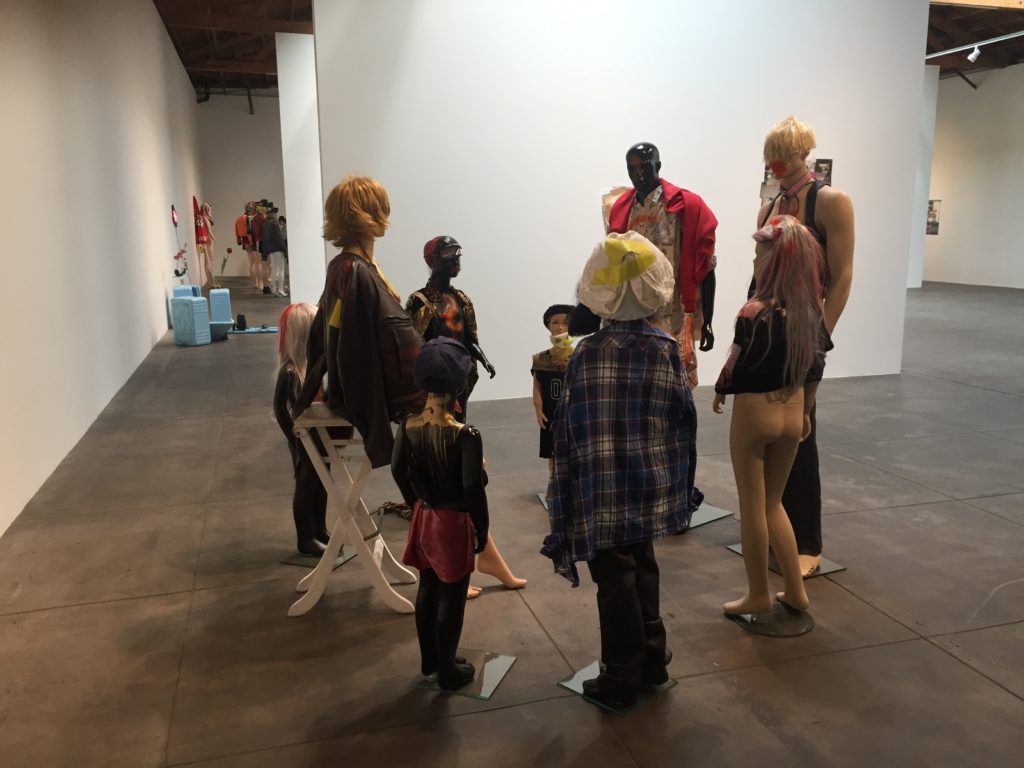